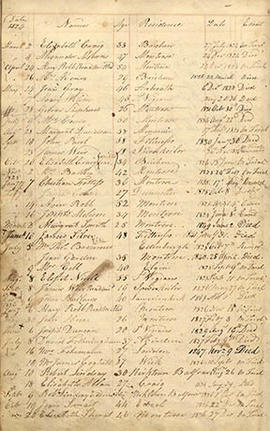 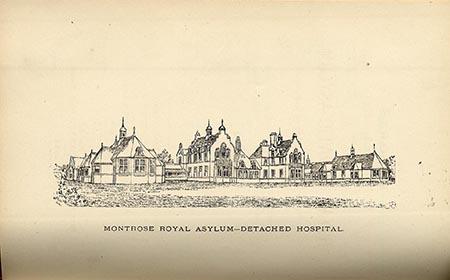 The Montrose Lunatic Asylum, Infirmary and Dispensary was founded in 1781 by Mrs. Susan Carnegie of Charleton for the treatment of private and pauper patients, and was the first mental hospital in Scotland. It was built on the Montrose Links on a site bounded by Barrack Road, Ferry Road and Garrison Road and was granted a Royal Charter in 1810.
A new improved Asylum with better facilities was completed in 1858, situated on lands of Sunnyside farm, in the village of Hillside, on the outskirts of Montrose. Carnegie House was built for private patients in 1899. In 1913 the Royal Charter was amended, after which it was renamed the Royal Asylum of Montrose and that part of the Institution which consisted of the Infirmary and Dispensary was disjoined and received its own Royal Charter.
However, overcrowding was a problem with patient numbers reaching 670 by 1900, precipitating the need for further accommodation. As a result, Howden Villa was completed in 1901 and Northesk Villa was completed in 1904. Westmount Cottages were built in 1905 to house the extra staff required to care of the additional patients. The lease of Sunnyside Farm expired in 1911 and over 52 acres were purchased for the sum of £4500. Angus House was built in 1939 to accommodate elderly patients suffering from dementia.
With the advent of the National Health Service in 1948, the Asylum was renamed the Royal Mental Hospital of Montrose and came under the jurisdiction of the Eastern Regional Hospital Board. It was again renamed in 1962, when it became Sunnyside Royal Hospital. When Sunnyside celebrated its bicentenary in 1981, the number of patients was approximately 400. The hospital closed in 2011. Many of its patients and functions were transferred to the newly opened Susan Carnegie Centre at Stracathro Hospital, Angus.

The records were previously held by Sunnyside Royal Hospital.

The bulk of the records are on paper. Also included are photographs, audio cassettes and plans.