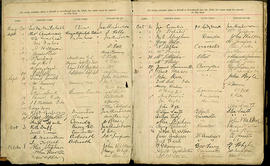 Carnoustie Golf Club was formally established in 1842 and is based at what has been described as one of the toughest links courses in the world. Golf is known to have been played at Carnoustie from as early as the 1500s and the club is known to have been in existence for some time before its formal foundation. The club is believed to be among the ten oldest surviving golf clubs in the world.

The Club has produced several first class players and in the late nineteenth and early twentieth century many Carnoustie golfers went to the United States where they became professionals. These included the famed Smith brothers. When the Professional Golfers' Association of America was founded in 1916, nearly half of the 82 professional members were from Carnoustie.

A golf course was first laid out at Carnoustie in the 1830s by the publisher Robert Chalmers. The current course was designed by Allan Robertson and Old Tom Morris in the 1850s and was modified and extended by Morris in the 1860s and redesigned by James Braid in the 1920s. The course has staged the Open Championships several times including in 1999 when Scotland's Paul Lawrie won one of the most dramatic championships. The clubhouse dates from 1898.

The records are on paper and include photographs.

Note: Stuart Hackney, listed as author of 'Carnoustie Links - Courses and Players' is erroneously thought by some to be an alias of Bill Coupar