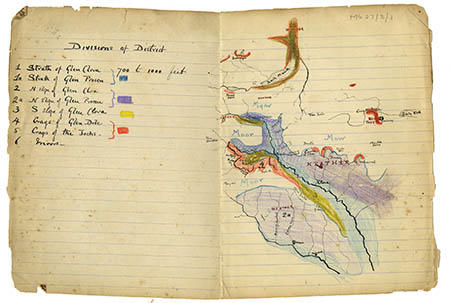 George Taylor was born in Edinburgh and educated at Edinburgh University where he gained a degree in Botany. Leaving his post-graduate employment at the Royal Botanical Garden, Taylor moved south to establish the botanical section within the British Museum. In 1956 he was appointed the director of the Royal Botanical Gardens at Kew and gained a knighthood in 1962. As well as his official career he travelled widely in China, Asia and Africa on plant collecting expeditions and had a special interest in the Himalayan poppy.

Robert Henry and Margaret Corstorphine were keen amateur botanists from Arbroath who dedicated their talents to studying the flora of the county of Angus. Over a forty-year period lasting into the early 1940s they amassed a comprehensive Herbarium and botanical library and were also engaged in the compilation of a manuscript survey of the flora of Angus, which was intended for publication. Taylor became closely involved with the Flora of Angus after the death of Robert Corstorphine. Margaret Corstorphine welcomed his assistance as her poor health left her unable to continue with the work alone.