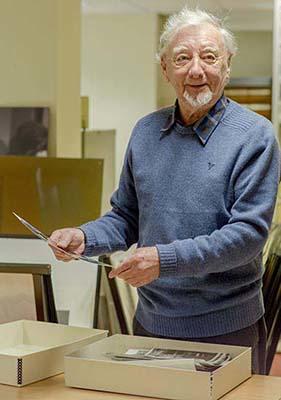 Alex Coupar was educated at Dens Road and Morgan Academy. He always wanted to be a photographer and joined DC Thomson after leaving school as a press photographer, eventually specialising in theatre work and the Scots Magazine.
In 1953 he served his National Service with the Royal Air Force School of Photography where he was a publicity photographer. In 1955, Coupar returned to Dundee and DC Thomson and where he worked on news stories and with the Dundee Repertory Theatre, producing production and publicity photographs.
Leaving DC Thomson in 1966, Coupar set up his own studio at 19 South Tay Street, working freelance for the press and for companies like Dundee Rep and Bett Brothers builders (his first clients). Coupar's studio, Spanphoto, became known as one of Scotland's premier photographic firms.
Alex Coupar married Margaret with whom he had a son and daughter. He retired and closed Spanphoto in 2000.