Photographs and cuttings relating to Canon Leslie Verdun Stratton and his History of the Church of St John the Baptist, Dundee, plus the church's financial and other administration records and registers of baptisms, marriages, burials and confirmations

Members and officials of St John the Baptist, Dundee 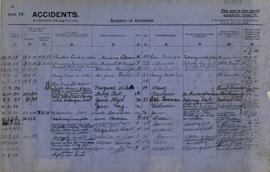 Loose pages that have come free from the statutory factory register

Notes on Gaelic personal and place names 1899-1926; Gaelic clan names 1899-1912; notes on the derivation of names beginning with Mac 1913-1926. George D Paterson added to the notes on clan names, presumably after the death of Gilchrist.