Born Dunnichen. Lived at Castle Huntly and then Balruddery, both in Longforgan. He also owned Spring Grove and cottage at 170-172 Nethergate, now part of the University. He was the father of eight living children, including Eleanor White and Beatrice White who married John and Frederick B Sharp respectively.

Married to Elizabeth and Eleanor White respectively. Taken at Balmuir.

Hugh F. B. Sharp and his mother, Beatrice (nee) White Sharp at the Hill of Tarvit. 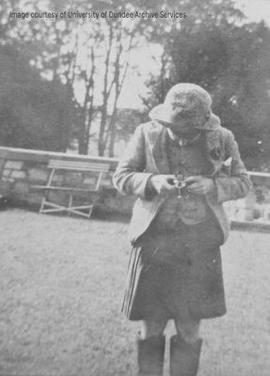 Hugh F. B. Sharp at Hill of Tarvit.