Charter (in Latin) , with seal, and partial transcript

Duplicates of superhero comics, 2000AD, and UK based comics.

Documents are relating to the organisation of Club 66 reunions.

Papers of the Friends of the University of Dundee Botanic Gardens 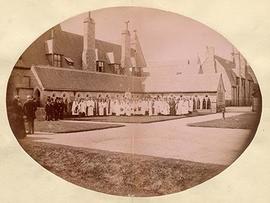 College and Collegiate Church of The Holy Spirit, Isle of Cumbrae

College and Collegiate Church of The Holy Spirit

Photographs from Electronic Engineering and Physics Division of the College of Art, Science & Engineering, University of Dundee mainly relating to the former Physics Department

Typescripts and correspondence related to sanitation, health and diseases such as Yellow Fever.

Scripts for comics from various authors and comics creators. Some are printed and the physical copy is available. Others are digital.

Complaint by the Superintendent of Police, Dundee against John Bowes, preacher from Liverpool

Complaint by the Superintendent of Police, Dundee against John Bowes, preacher from Liverpool, 1840; Adjournment of trial, 1840 and Sentence of John Bowes, 1840