Souvenir for a "bon camarade", Lee.

Kept by Joseph Lee while a prisoner of war at Karlsruhe and Beeskow Camps, Germany. Includes excerpts of prose and poetry copied from books which Lee read in camp. Also cuttings [English, German and French] of historical figures, interesting buildings, photographs of famous pictures and works of art and 7 photographs [from a German magazine] of views of Beeskow. Started 16 Dec 1917

A War Prisoner's Journal: I Karlsruhe 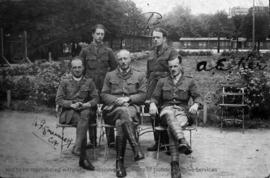 Hudsons Last Voyage' a hand written account by Lee of Henry Hudson, a navigator who was lost at sea after mutiny on 'Discovery'

Manuscript by Joseph Lee about his reasons for the literary quarrel with Robert Bridges, with excerpts from the correspondence between the two men, and an account of their meeting in Oxford.

Relating to 'A Lick at the Laureate'

Additional note about Reserve of Officers.

A book of peoms, 'Beneath Troubled Skies, poems of Scotland at War, 1914-1918'. Edited by Lizzie MacGrgor. Includes poems by Joseph Lee.

Pencil sketches of nude figures drawn by Joseph Lee [presumably when he attended classes at the Slade School of Art, London, c.1920]. Includes two unrelated drawings: pen and ink drawing on card of 'Wallace Knocking Stone, Longforgan'; 'The Auld Bear-Stane', signed 'J.L.' n.d., and pen and ink drawing of part of an unidentified ruined building, unsigned. [These and two loose Slade sketches are contained in an envelope at back of book.]

A fellow prisoner who had died of pneumonia. Includes a large number of prisoners including Lee and German Military personnel with a Lutheran pastor conducting the service over the grave. The photograph was taken by F. Albrecht, Karlsruhe. [Reproduced opposite p.45 of A Captive at Carlsruhe.] [See also MS 88/1/1 p.175.]

Card declaring Lee is a prisoner of war

CD of the First World War in Poetry

CD 'The First World War in Poetry' read by Rory Kinnear. Includes 'The Half Hours Furlough' by Joseph Lee. Purchased by Archive Services 2014

Certificate of Commission as Second Lieutenant in the Infantry of the Land Forces.