A Catalogue of Books Relating to the Great War

Held in the Library of the University of Dundee, compiled by Heather Murdoch, Hilda D. Spear and Dorothy Valentine. Blackness Press, Dundee.

A City at War: Dundee and the Battle of Loos'.

Draws on locally published poems and correspondence of members of the Black Watch.

Correspondence from the Braid family and others to Jim whilst at war.

1 Letter from friend to Jim. Talks about mutual friends; men in Edinburgh who won't enlist. (Envelope marked Charles Wright, Floorcloth Merchant, Alexandra Street, Kirkcaldy). 2-3 Letters in envelope marked Killed in Action, from family to Jim. Barbed wire is being put up around the harbour and pier; no fishing is allowed; a sentry is on duty; people are afraid of a German landing; family are anxious to see him - have heard that leave has been stopped for the moment; war fever seems to have gone down; talks about people at home. 4 Letter from parents dated 6 October 1915 [10 days after Jim had been killed], reads "are there anything wrong with you that you are not able to write were you in that Battle as I see your Regt was in it. We are in an awful state not getting word can't you send a PC."

Correspondence from the Braid family to Jim whilst at war.

One letter written 5 October 1915 [10 days after Jim had been killed] reads, "... are there anything wrong with you that you are not able to write were you in that Battle as I see your Regt was in it... cant you send a P.C...". Correspondence from the Braid family and others to Jim whilst at war.

Correspondence of Private J. Braid to his family in Kirkcaldy, Fife.

Correspondence of Private J. Braid to his family in Kirkcaldy, Fife. [J Braid was killed in action 25 September 1915 on the first day of the Battle of Loos]

Letters 1-26 Describe training at Aldershot. 1-5 Letters describing early army life; including bullying by a corporal (stopped as a result of older soldiers' intervention); taking classes at school and receives 3rd Class Certificate; descriptions of barrack life; has signed for 7 years with 5 years in the reserves; enquires after friends at home, including Boys Brigade. 6-12 Refuses offer from parents to be bought out; leaving for Dover for dutyman's course, then on to Belgium; new recruits joining regiment - possibly starting a 3rd Battalion; relates news about Territorials in Belgium; news of company training and Battalion cross country; gives news about the position in Ulster - says that many officers are handing in their papers and some regiments are refusing to go; news about friends from home. 13-16 Acknowledges receipt of parcel from home; denies not liking the army; describes visit by the King, Queen, Princess Mary and "the two oldest sons"; went out with the company in full number ready for war; preparations for Regimental sports; had to extinguish bushes on fire; will have to go through musketry and recruits courses before manoeuvres; marching to Wales at an average of 20 miles per day; on short pay because he needs more kit. 17-23 Doesn't have much to do at present because he has been dismissed; describes life; a captain and a mechanic were killed in an aeroplane accident, gives description of the captain's funeral; failed his 2nd Class Certificate; started musketry course - told he could be a first class shot (is a second class shot at the end of the course); takes another preliminary exam for his 2nd Class Certificate; describes guard duty. 24-26 Receives 2nd Class Certificate - only private in the platoon to receive one; started firing course; unable to come home because he only has 8 days leave and travelling etc. would be too expensive. 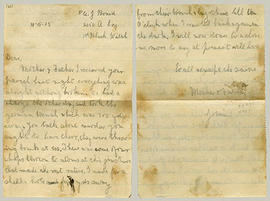 From Duncan in Duchess Westminster Hospital, to Mrs Duncan, Dundee: "wounded in both legs; not serious".

Items from the collection of Hilda Spear.

From Jim's parents to David Vallance asking for more information about Jim's death and burial; inviting him to come and see them if he is spared to come home. Envelope is marked deceased and Killed in Action.

From Henry A Williamson of Churchmount, Lochee, to inform the family of Jim's inclusion on the roll of honour in Victoria Road Church. Letter from the Independent Order of Rechabites (Fife and Kinross District) expressing sympathy.

27-32 Describes journey to the camp; showered with chocolate when passing through London because people thought they were on their way to the front; received parcel; says that 30,000 Germans are dead and 20,000 have been taken prisoner, and that "the war is just about finished now"; complains about the food; relates news of a German submarine sinking a battleship near Aberdeen; being given civilian boots and suits because they have run out of uniform; expects the camp to be turned into a military station; there are rumours of a big sea battle; a big draft left for the front; nearly all officers (including the Commanding Officer) of the 1st Battalion have been killed or wounded.

33-40 Working in the cookhouse; Battalion left for the front; took part in Highland Light Infantry mobilisation parade; have to be ready to march off within 6 hours of getting the order - expected at any time; discusses people from home; Battalion lands in France; gives news of a spy imprisoned for starting rumour about Black Watch being "cut up"; being sent to Cromarty; food prices increasing; Battalion "in the thick of the fight"; would have preferred to be at home for Christmas.

Letters 41-77 Describe life in France and at the Front

41-47 Ready to move at a moment's notice; had choice of Battalion - chose the 1st Battalion; wished he had been at home for his birthday on 20 November; not yet in the firing line, but hopes to be there soon; tells parents not to put Regiment details on letters; leaving for the front. 48-49 Sending Field Service Post Cards. Can only select one from a series of options - rest have to be deleted. Only able to select "I am quite well". Postcards would be destroyed if anything else was written on them. 50-57 Weather is cold and has been some snow; had to attack through trench half full of water; sends Field Service Post Cards; news of his parent's soldier lodgers; talks about family and friends at home; shortage of writing materials so sends post card thanking parents for parcel; not allowed to write letters when on reserve in the trenches; describes rations: 1 oz bread per day, biscuits requiring hammer to break them up, bully beef; complains about conditions: lice etc., unable to sleep because of the vermin; asks parents when the war will end, questions whether he will be home by the summer "Austrians are about finished now...The Russians will no doubt finish the war and the quicker the better." 58-60 Resting; asks to be sent some cocoa; sends Field Service Post Card; mentions he's been "collecting lost nerves"; all bread being sent to hospitals for the wounded; has now got photographs from home, can look at it and think of the old days; had sports whilst on rest; many casualties the previous Sunday; talks about a Frenchman who prophesised the beginning and end of the war - the war should end 22 August 1915 (5 days from the date of the letter), Jim doesn't think it's possible. 61-67 Took a German trench in a charge; bombs being thrown at them and some men were blown to atoms; he went for a shell hole to lay there until dark, and then crawled back again; sends Field Service Post Cards; in some places it is hard to believe there is a war going on as Catholic priests are walking about fearlessly - he would like to hear a sermon in the trenches; says Peter (brother? - mentioned frequently throughout letters) would be better staying where he is, says he was foolish to run away. 68 There is no time to censor letters whilst in the trenches; glad to receive mouth organ - will liven things up a bit; last position was only 35 yards from the Germans; went into a nearby village and was treated well; shall be classified for a miner when he comes home; no chance of getting a furlough - only the officers are getting them. 69-72 Out of the trenches for a rest; hopes to be able to get 7 days leave; mentions someone from home who is missing in action; there are rumours about the Expeditionary Force coming home for two months rest but he doesn't think anything will come of it; passes have been stopped because some men are not returning at the given time; being treated badly - complained to the Company Officer about bread shortage; currants, raisins, dates etc. are being rationed out and issued instead of jam. 73-77 A few casualties at the last position - someone he joined with has been taken prisoner; had to make an obstacle for the wood between the British and German trenches; away from the Regiment making a shooting range for those on rest; heavy rain meant it was almost possible to swim in some areas; returned to Regiment and is down for two weeks training; clothing is meant to be free - will see the Company Officer if it isn't; wearying, would welcome 7 days leave, but he knows his turn will come.

Letters and cuttings copied into a book by John Macqueen's mother

Primarily concerned with Macqueen's involvement as an officer while fighting in the Middle East. Throughout the letters there is a strong sense of optimism, even as late as June 1918 when he writes, "It is really wonderful to be on active service in a spot like this", and many references to his family both at home and at war. [Macqueen met his future wife while on active service and there is much mention of her.]
Results 1 to 25 of 56
Generated: 2021-09-22
2.6